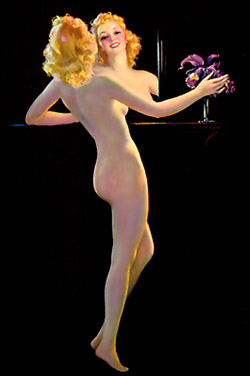 For those poor souls who have not have had a chance to visit San Francisco's famous Power Exchange sex club, here is a taste of what goes on there. Being a nice girl, I've only been there for anthropological study (play along with me on this, Jamie!), but here's my take on it.

I've had a fun time every time I've gone there. Sometimes I meet some guys, or trannies, or even girls I like, and sometimes I don't. So what? It's still quite amusing.

As a trannie (or het) you are welcome to prowl the ground floor and the basement. The upstairs floors are reserved for gay guys.

There is a range of privacy options. Some of the spaces are quite open, and some are quite private. One has a web cam on it, so watch out for that! (I think there's a sign up, I'm not sure exactly which room it is.) For the very open spaces, you can put a chain up across the entry and nobody will come in without your permission. Do that, or else you'll be surrounded by a dozen masturbating guys, pointing their weapons at you! I think even the most private rooms have like little windows in the doors so you can be observed somewhat. Look for a favorite spot on the ground floor called the "Hotel"--there's a sign that says "Hotel", and you go up a flight of stairs and have a room that's pretty private, except for anybody who comes up the stairs and watches. I went up the stairs one time looking for a friend, and there was a chick blowing a big black dude up there; the chick looked up--it wasn't my friend--and she asked if I wanted a turn blowing! I declined, being a nice girl.

One area on the ground floor just inside the entrance has a pool table and music for dancing. There's even a little stage with a couple of poles you can practice your pole dancing on--you've got to live out your pole dancing fantasy at least once!

As for what sexual activities go on, it seems to be mostly oral and hand jobs. But anything consensual is allowed. I've seen people taking it in the kiester right out in the hallways. The only rule is safe sex, and condoms and lube are provided in quantity.

It is a very safe environment in the club. (NEVER LEAVE THE CLUB WITH A GUY YOU PICK UP THERE!) There are security guys around, and if you complain about anybody bothering you or touching you without permission, they will be booted out quickly and permanently. The guys know this, so they are very good about asking permission. Don't be shy about introducing yourself to girls or guys that you think you'd be interested in meeting. You could get a cold shoulder from some of the pro's, but most folks are pretty friendly. The best technique for getting guys seems to be: find an unoccupied fairly private room, and just sit in it and be available. You can take your pick of the various guys who drop by. Most will just want (actually they seem to expect) a quick blow job, which is fine if that's what you want. Being a nice girl, I torture them by making them talk to me, and even engage in foreplay. I guess that's why sometimes I don't score at all.

Finally, I like to use the Ladies Room in the basement; it's in the back corner furthest from the stairs. You hear the most interesting things in there!