The 11th Annual Southern Comfort Conference was held at the Colony Sheraton Hotel in Atlanta GA September 17-23, 2001. This was the first transgender conference I attended, and I had a wonderful time. I'm told Southern Comfort is traditionally one of the best conferences every year, and I can certainly believe it. The people were great, the weather was lovely, and the hotel was nice (better than the venue from previous years, everyone said.) I didn't have a chance to enjoy all of the opportunities afforded by the conference, of course, so this is not thorough review. I just thought I'd share a bit about my experiences there, to give an idea to those who could not attend, and perhaps bring back some nice memories for some of you who were there with me.

To get things started, I flew to Atlanta from San Jose on Delta, travelling en femme. Everybody was worried for me what with the increased airline security, and my photo ID being male. But I was a coward, I just didn't want to spend that much time en drab! As it turned out, there were no problems at all. The airport personnel were very kind and understanding. One security guy even commented that I had lost some weight, for which I thanked him profusely.

I travelled and roomed with my dear friend, that well-known pillar of the community Jamie Faye Fenton. Here we are posed outside the hotel: 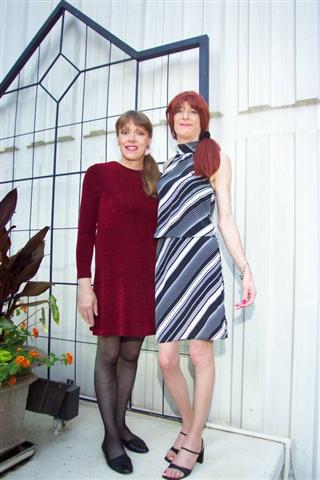 Thank you so much, Jamie, for taking good care of me!

We arrived in Atlanta Thursday evening. As our taxi neared the hotel, we knew were in the right place, because we started spotting some very tall (and beautiful) woman walking around town. The front door opened directly into the lobby bar and check-in area, and woo-hoo, trannies everywhere! This be the place! My first impression was that it was very cool that there were so many lovely transgendered women (and men!) around, and I fit in so comfortably. But there was a funny feeling that it took me a while to identify. Finally I got it. For the first time that I've been out in public "dressed", I was not special! That was pretty neat (but I have to admit, I kinda missed being special.)

The conference had a shuttle running out to some particular club Thursday evening. We changed out of our travel grungies, grabbed some dinner, and jumped on the bus. One of the girls convinced us that there was a better club named BackStreet Atlanta, and the bus driver was kind enough to drop us off there. BackStreet is something else! It's a "private" club (you buy a $10 "membership" good for a year) so it's allowed to operate and serve booze after hours. So it goes all night long. In fact, it doesn't start filling up until 2am when all the other clubs close. Us t-girls pretty much had the huge, multi-level dance floor(s) to ourselves for the first few hours. Later it filled up and got wild. The crowd is primarily gay guys (primarily with their shirts off) but the club is picking up a significant straight clientelle, being the only after-hours joint around. I was kind of surprised that there were that many gay guys south of the Mason-Dixon line, having bought into the myth that they're all in San Francisco. But they are there, and they know how to party! They also seemed less "gay" than what I'm used to. I mean, I wouldn't have pegged most of them as gay at all if they hadn't been dancing together with their shirts off. Well, travel broadens, doesn't it?

Another cool thing about BackStreet is that you wander up to the 3rd floor, and there's like a whole 'nother club there, which has a drag show that goes on from 2am until goddess-only-knows when. The Mistress of Ceremonies Charlie Brown is funny and nasty, and loves to rib the audience members. The peformers are very pretty and mostly do straight-forward lip-syncing. So when you get tired of dancing downstairs, you can go upstairs to re-charge, and vice-versa. Eventually you look at your watch, and it's 5 am. This is where I spent all 3 of my nights in Atlanta!

I was not able to attend any of the morning sessions at the conference, since it conflicted with my need for beauty sleep. I did make it up for the nice luncheon each day, which is a chance for all the girls to get together in the grand ballroom and socialize, as well as chow down. Dinner was the same way each evening, followed by entertainment such as the talent show and a performance by the Atlanta Gay Men's Chorus.

Of course the conference includes a variety of sessions covering a range of topics. You could easily find something that would interest you, in fact, the problem was too many interesting sessions scheduled at the same time.

I attended a session about transgender political activism chaired by Monica Helms. Monica and two other ladies shared their stories of how they became active in tg causes, and what it's like. I have personally been fortunate in my life that I haven't suffered any injustices as a result of my transgenderism, but clearly such problems go on all the time. The point was made that there aren't natural leaders taking up our community's causes, we need to shoulder the burden ourselves.

Another session I went to was called "Living in the TransWoman's Body," chaired by Carrie Davis and Dr. Anne Lawrence. This session was for trans-women only, to share and discuss the effects of hormones and surgeries on our bodies. Carrie and Anne were surprised and delighted at how large of a group showed up, 52 in all! We sat on the floor (on towels) in a big circle, doors closed, and some women shed their clothes to intimately share their experiences with the others. Everyone was left with a tremendous feeling of sisterhood and gratitude for the good information that was learned. As a pre- everthing TS myself, I felt I got a more visceral feeling for the physical and emotional impacts of these doings than I ever got from reading about them. I was grateful to everyone for sharing.

(If you've never visitted Dr. Lawrence's web site Transsexual Women's Resources, you will be delighted with the wealth of information available there.)

Finally, I went to a session called "Trans-Trans Intamacy and Sex" where a trans-man + trans-woman couple shared a lot about their relationship and their experiences, spreading the message that we (of all people) should be open to relationships with good people regardless of our pre-conceived notions of what we may be looking for. Many of us complain about how hard it is to find friends and lovers, but are we really open to all the oportunities that present themselves? Also, on the sex side, one of the group participants brought along her sexual "bag of tricks" and conducted a brief show-and-tell session explaining her techniques for using various toys to promote and enhance trannie sex--somewhat to the embarrassment of the session moderators, I thought!

Well, thats the general run-down of what I did in Atlanta. Mostly I remember the partying, meeting all the wonderful people, and feeling I was transported into a magical trannie universe for a few fantastic days. Southern Comfort 2002, here I come! See you all there, I hope!